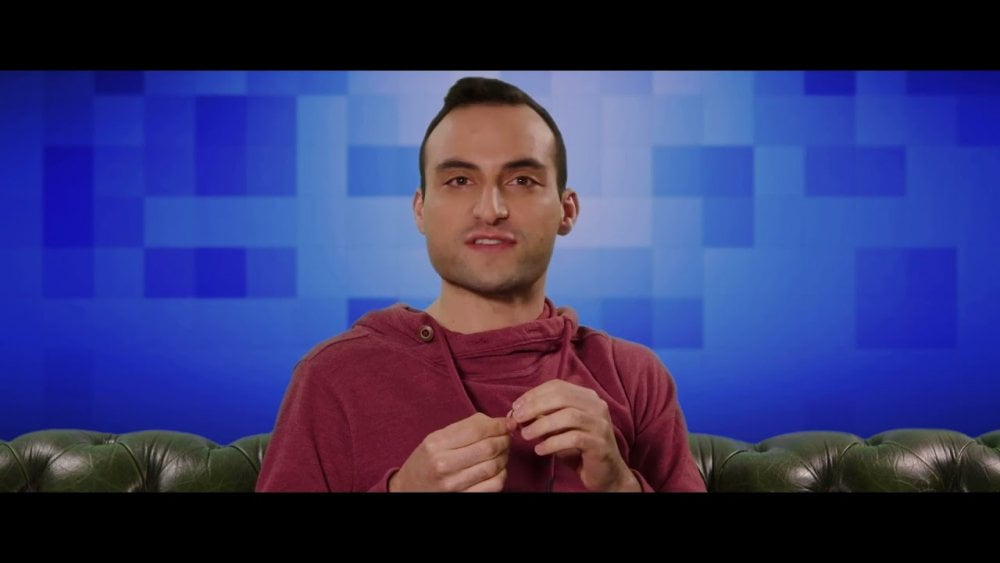 Sam, a recent runner-up of the summer phenomenon Big Brother, takes an impromptu solo trip to England with his reality TV earnings. While abroad, he encounters a handful of strangers who inadvertently guide him in confronting the deep, dark truths he revealed on national television.

When Brett Epstein submitted his latest queer short film, “Diary Room”, for a review, I said sure! While I’ve had a couple other review requests, his was the first to come through the website. But more importantly, I was intrigued by the synopsis. Yet, I was equally cautious because Brett not only wrote the short, but he stars as the lead. I’ve found that more often than not, this isn’t a great combo. But I was ready to be proven wrong! Let’s break it down and see how well “Diary Room” fared.

Sam (Brett Epstein) is at a bar ordering a drink, albeit a bit awkwardly. He want’s an alcoholic drink – but without the alcohol. The bartender (Charlie Tantam) finally heads to make him something when Sam points out the drink of the guy next to him. Except when that guy offers Sam a sip, Sam refuses saying that “it’s a long story.” When the bartender returns with a martini, Sam pays in coins before sipping his drink all alone at the bar. After the credits, and perhaps on a different day, Sam is alone at a different restaurant overlooking the Thames when a women randomly recognises him (Louise Goodfield). “Sam, from Big Brother?” she asks. Even though Sam is honestly surprised that people there would know who he is, he initially refuses a photo with her before admitting he was joking! As they take the selfie together, she tells Sam that he should’ve won. She loved his final speech, and all her friends can even quote it! Before she leaves on her way, she notes to Sam that he’ll eventually find a relationship. Sam brings the mood down a bit though by lamenting he’s already in his thirties.

Back at the initial bar, Lucian (Sam Oladeinde) starts to chat and even flirt a bit with Sam. Sam notes that he’s not from here, “Obviously”, although it comes out rather harsh. However, he quickly apologises and things smooth over as Lucian sits down next to Sam. After some initial “where are you from” banter, Sam finally admits that he was the runner up on the US version of Big Brother. With the money he got, he’s doing some traveling to the UK. Things are going along rather smoothly, until an awkward silence erupts. “Are you ok?”, Lucian asks? “Yeah, I’m fine!”, Sam quickly chimes back in before Lucien admits he needs to get going to join his friends for karaoke. But before Lucian leaves, he gives Sam a quick peck on the cheeks. Yet again, Sam is left alone.

In a flashback, we’re finally watching Sam’s diary room interview. Despite promising to not drink all summer, Sam is gladly enjoying some Proscecco! As typical with diary room confessions, Sam begins to ramble about how crazy it is about how he’s going to have to go back to his normal life soon. But normal life of what? “Anxiety and depression?”, he confesses. As his thoughts continue to spew out from his mouth, Sam ponders how he even passed the psych eval to get on the show! His confession gets a bit weird as it sounds like he lied just to get on the show. But before that announcement can sink in, Sam has already moved on about how he feels alone, and not just out in the world. Even on the show, he was the only gay guy. But he notes that in the house, at least it makes sense to be fake – you’re trying to win. But out there, it’s exhausting to be fake. He continues on this train of thought, weighing the balance between real and fake, light and dark. How Sam feels awkward in his own skin, to the point he doesn’t feel sexy. Adorable and awkward, sure! But that hasn’t landed him a relationship yet, he laments. We’re getting the REAL Sam in this confession.

Reflecting back on an incident from seventh grade when another kid called him “fag”, he ties all of his relationship problems back to that moment. To that feeling that it evoked, how it lead him to “push gay away”. Which has inevitably had him lusting after straight guys instead of gay guys. “I just want to be loved.” he quickly mutters. Coming back into reality at the bar, Sam suddenly springs up from the bar and chases after Lucien. “Do you have room for one more?”, Sam asks. “Sure,” they all remark even though Sam quickly notes that he is the worst at Karaoke! Finally, and perhaps for the first time in a long time, Sam relaxes as the entire group walks down the stairwell and out of the bar.

[After the credits, we get a quick glimpse of Sam singing karaoke. And yes, he is awkwardly as bad as he confessed!]

Overall, I wasn’t a huge fan of “Diary Room”. Yet it’s tricky to explain why. Cinematically, it’s hard to find any major flaws. There’s a bit of shakiness to some of the handheld camera shots, but really only noticeable if you’re looking for such a flaw. The camera angle and focus during the actual diary room interview is steady so there’s actually little to critique. The other two scenes do a great job to set up the awkwardness and loneliness that Sam is trying to overcome; the camera angles are a tad slower and even stagnant. Heck, even the pacing holds true to the underlying storyline as it reaches its conclusion.

My issues lie with the storyline with “Diary Room”, and an odd quip with the acting. To start, he story hinges on Sam being the second-runner up on the US version of the reality TV show, “Big Brother”. My trouble lies with the facts of this premise. First, there was no summer 2020 season. Furthermore, while there was a 2019 summer season, the only male “Sam” was booted halfway through; he was not the runner up. In fact, there has not been a male contestant named “Sam” as the runner-up in the entire 22 seasons. Now, I could chalk this up as mere fiction – perhaps even fan fiction. But with a franchise and brand as well known as Big Brother, it’s risky to add people who don’t exist. It’s one thing to create romances between existing characters, an entire different situation when you add new people.

And now onto my weird quip of “Diary Room” – Sam, as written and acted by Brett Epstein. I actually love Sam’s character. He is exactly as he confesses: awkward yet adorable; driven by underlying anxiety and depressing fears that stem to Sam being gay. But it’s a bit chauvinistic to think that creating a fictional cast member for a well-known franchise was the only way to bring Sam’s character to life. And Brett certainly brings Sam to life in an utterly believable way! But… was Brett acting, or just portraying himself? And Sam is a character that he wrote, so did Brett write to his acting strengths? Or was it playing it safe? I personally hadn’t seen anything else Brett has been a part of before. But after watching the acting reel he shared on his portfolio, I’m forced to think that Brett was simply being himself. Is that poor acting or bad/incomplete writing though? I leave it for you to decide.

Regardless of my opinions, for they are simply MY opinions, there is certainly something to be said of anyone who can write and act in their own short film. As noted, I have a few fundamental issues with the premise of “Diary Room”. Equally, I am ambivalent about the acting/writing behind Sam aka Brett. Yet these factors do not undermine the fact that this is a strong queer short film with a character that deserves more recognition. Many gay men have underlying fears and anxiety; we create personas in order to try and blend in with society. Brett Epstein rips off the cover and exposes all of that, while showing that we can overcome those self concerns. For that reason alone, “Diary Room” is a worthy addition to your watch list.

The important queer relevance in “Diary Room” is how Sam’s character (and Brett’s portrayal) reveals our own inner demons. Yes, most of us know that the LGBT community has suffered taunts, slurs, and more. We all have a similar story to Sam, though how events like being called a “fag” affect us can vary drastically. In Sam’s case, he pinpoints that incident as the pivotal moment of how he sees himself during his Big Brother diary room confession. Perhaps because of his anxiety and fears, or perhaps because of the stress of a reality TV show and being the potential winner of the season, Sam opens up and lays it all out on the line. It’s honest, it’s revealing, it’s guttural. Sam says things that most of us have thought but might only confess to our closest friends – or psychiatrist. And THAT is why “Diary Room” is relevant. We get to see an honest representation of who we are. And even though this seems to have held Sam back for much of his life, at the very end we get a glimpse of hope for something better. That despite years of self-hate and doubt, there’s still a chance at happiness for all of us.