The story of two lads from Belfast as they stumble their way through the London gay underworld in search of ‘gainful employment’. This being the offering of sexual favors to older gay men in order to subsidize their respective giros. However, when one of the lads accidentally shags a punter to death, they are forced to look for ‘work’ elsewhere. It is then that they discover the myth of ‘The Bread in the Bed’ – a huge bed full of money. ‘Nine Dead Gay Guys’ is the result of the ensuing caper as the lads begin the search for the elusive bed.

Warning: This film is full of British slang, crude jokes, and crass language. If you find that offensive, this might not be a film for you. You WERE warned!

“9 Dead Gay Guys” is probably the most offensive and stereotypical queer film I have seen – and it’s also one of the funniest! This black comical farce does not attempt to hide what it is, and even embraces all of its political incorrectness as it dishes out one gag after another as we try to find out why the bodies of the gay guys – all nine of them – are piling up amid an attempt to find the money hidden in Golders Green’s bed.

In this hysterical British romp, Kenny (Glenn Mulhern) decides to visit his fellow Paddy (an Irishman for those not current with the slang), Byron (Brendan Mackey) in London expecting to crash with his mate who living the life as “he streets of London are paved with gold!”  Instead, he finds Byron passed out and squatting after a night with his favourite booze – Black Death. With just a fiver left, they pop over to the pup for a pint where Kenny not only realises it’s a “friggin gay pub”, but also discovers Byron’s real job when we’re introduced to Jeff (Steven Berkoff) for “Jeff week”.  Yup! Byron is a hustler performing “legitimate, lucrative work” – or at least that’s what he calls it because it earns him enough money buy his Black Death. It’s clear that Kenny is uncomfortable now around his mate, asking him if he’s is gay. Byron denies it, saying “This isn’t real gay sex. It’s not as if it’s anal, or arsehole, or sphincter, or shitter, or bumm banger, or butt fucker, or penetrative type sex.” (I warned you the script is crass!)

While Kenny discovers this unknown queer side to his mate, Jeff informs Bryon that the her majesty, the Queen (Michael Praed), is dead – electrocuted by a cattle prod! Now don’t worry, the Queen is not THE Queen of England, but another male homosexual. Dead Gay Guy Number One, actually. And no one knows who killed him! In a comical twist though, Bryon has the cattle prod in question in his possession – he swiped it off the guy he was blowing in the backroom the night before; a guy with a “three inch willy”. As Kenny tries to take it all in – no pun intended! – he and Bryon realise that they’re thirsty and broke, again. Back to the pub! There, Kenny is coerced into blowing Jeff, which comically leads them back to Jeff’s home. After a quick banter about how big the bed is, Jeff informs Kenny that it’s not as big as Golders Green’s bed (The Queen’s discreet orthodox Jew boyfriend) which is reportedly where all his  money is kept. But they don’t let that distract the reason they climbed in bed – for a shag. Except, just like his wife ten years earlier, Jeff has a heart attack mid shag and dies = Dead Gay Guy Number Two! (Cue dramatic music)

Despite having just shagged a guy to death, Kenny has a brilliant idea to fix his and Byron’s money woes – to steal the money left in Golders Green’s bed! Except the only clues they have is that the home is somewhere private in Golders Green (an area of London), and that the murderer has a three inch willy. The comical farce gets even better from there as each layer unfolds, and the dead gay guys keep piling up. They’re successful in the end – but the point of the story is not so much about the gold at the end of the rainbow, but the hysterical rainbow-filled arc to get there!

At a quick glance, “9 Dead Gay Guys” feels like a B-grade movie. The cast includes many unknown actors, the general style and look feels amateur. But once you start to look at things a bit deeper, the brilliance actually shines through. The film might feel and look rough, but that’s the style. The camera work is actually quite well thought out and planned; The editing incorporates smooth transitions that work well with the fast-paced storyline of a farce. The soundtrack is enjoyable, quirky and fun. I’m not sure if my favourite soundtrack moment is using the Hallelujiah Chorus when we meet Jeff, or the Wild West standoff music as we learn about Golders Green’s really hard, Red Bull test! Lastly, there is a grunginess to the look of film, but that’s offset by pops of colour in lighting, sets, and more. Subtle details that show the director’s imposition of vision.

The script is quite enjoyable and told in a unique style. Bryon begins the film in a voiceover that actually carries through the entire film. This device actually works quite well by letting us into that internal monologue to help explain the craziness of the plot – and on paper, it’s QUITE a crazy story! Without the voiceover though, “9 Dead Gay Guys” would not work nearly as well.

I actually have very few negative things to say about “9 Dead Gay Guys”. So why did I rate it mid-range, knocking down to 1/2 star each for the Script, Acting, and Directing? Because while I don’t have many negative things to say in those areas, they also did not “wow” me. The script is full of jokes that are quite crass. I found most of them enjoyable – but, they can equally easily offend. More importantly, if you took out those jokes, then there’s not much left to the film.

The acting and directing are reduced because the characters in “9 Dead Gay Guys” capitalise on most stereotypes within the community – including the negative derogatory ones. The butch lesbian “Iron Lady”; “Donkey Dick Dirk” – the hung African black man. The Desperate Dwarf (the one with the three inch willy!) Dick Cheese Deepak – the South Asian taxi driver. The list goes on. Again, I found the characters hysterical and the actors played each one well, but it’s easy to see how one could be offended.

“9 Dead Gay Guys” is most certainly not for everyone – but if you’re not offended, you’ll love it! It’s on my go-to list, and a perfect choice when I need something to cheer me up. Give it a watch and it’ll surprise you!

With 9 dead gay guys, “the Queen” (no, not THAT Queen!), the lesbian “Iron Lady”, hustling, backrooms, and shagging all around – there’s NO question that “9 Dead Gay Guys” is a Queer film! 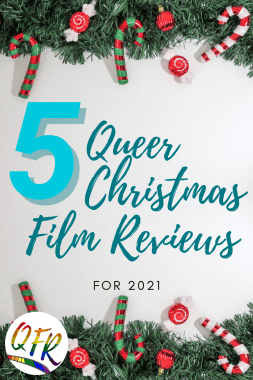