By playing this video, you consent to Google & YouTube's policies.

Temptations at a drama camp threaten a gay relationship that may already be cooling.

There are no small parts

[This film review is part of the “Eating Out” Saga. To read my review for the next film, “Eating Out: The Open Weekend”, click HERE. To recap the entire saga, head over to THIS post!]

Ok – so I lied before. Perhaps it’s my fan for theatre, but “Eating Out: Drama Camp” is my favourite in the series. There are no casting changes and we get even more depth to the characters we already love. The storyline is a reverse twist of the original film’s plot, which results in even more comedy and laughs. But most importantly, this film ends with a positive message and hope. It’s a great entry in the series! 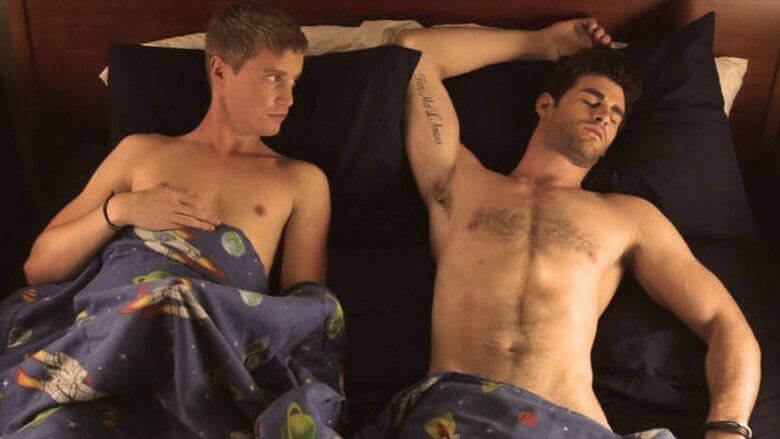 At the van, Jason helps Lilly load up all their suitcases. Casey and Zack show up with theirs, but now the door won’t latch. Enter Benji, who takes off his shirt so they can tie the door together. Everyone’s eyeing up Benji, including Zack – Casey notices and introduces himself as “the boyfriend” creating an awkward tension. When Genevieve mutters asks if anyone is straight, Benji chimes in, “Me too!” surprising everyone. Back at camp, owner Dick Dickey informs Penny, this summer’s quirky work-study applicant, on her duties while everyone is getting settled into their cabins: Zack is bunking with Jason and Benji; Casey is with Beau, who sleeps nude (yes, we see full frontal nudity!) and Lilly, even though Lilly being transitioning. When Zack goes to help Casey unpack, Jason confronts Benji about why he’s pretending to be straight. Benji admits that he didn’t know Zack had a boyfriend, and felt sorry for coming between them. Together, they hatch a plan to keep up the charade as an “acting” exercise.

With everyone gathered to kick off the summer, Dick Dickey explains about the scene competition: recreate one of Shakespeare’s scenes in a new format; the winner gets a free vacation! Except he also a twist – there will be no sexual misconduct at camp; being caught with one’s pants down will get you expelled, no refund! While problematic, things keep moving as classes and auditions start. Jason recreates “The Taming of the Shrew” but with a gay twist casting Zack, Benji, and Lilly as the leads because of the incredible tension brewing between them. Tiffani returns as a vocal instructor with an ‘open-throat’ method; Mr. Thompson, the art instructor from “Eating Out 2: Sloppy Seconds” returns as an acting coach, still as flamboyant as before. And Dick Dickey sets aside his distaste for sex and teaches stage kissing and musical. Throughout, Casey suspects Benji is actually gay – but starts to also wonder if Zack might be better off with Benji instead of him.

Things get crazier as tensions – both physical and sexual – start to rise. Casey teams up with Penny to sort out if Benji is actually straight, though all their hysterical efforts fail. Jason keeps Zack and Benji from kissing in their scene, though rehearsals keep getting interrupted because drama unfolds between Jason and Lilly. Benji finally admits that he’s actually gay, and falling for Zack. Casey finally talks to Zack about their slump and breaks up with him, telling Zack that he isn’t the right one for him – and that Benji might be. Jason equally comes to realise that he likes Lilly, but struggles with the fact that she is trans – and Lilly simply calls him out on his problem before running out of rehearsal. When Casey sneaks into rehearsal and pretends to be Jason, Zack and Benji finally erupt with sexual tension onstage – only to be caught in the act by Dickey. Suddenly, they’re all kicked out of the competition. Until Connor seduces Dickey and convinces him that sex is totally worth it! Now, their scene is back in – and despite a few more twists mid-performance, everyone ends up together and happy. Oh, and they win the competition!

While plenty of people are not a fan of this entry, there’s actually very little I dislike about “Eating Out: Drama Camp”. I will talk about a common critique though: how Casey just ‘gave up’ on his relationship with Zack at the first hint of a slump. First off, that theory presumes that “Drama Camp” takes place immediately after “All You Can Eat.” However for all we know, they could’ve been dating for months, if not a year or more. But even if the time was short, I don’t view this as Casey giving up. Instead, I read it as Casey accepting that his feelings towards Zack might be love; it could just be his initial lust paired with not wanting to let Zack go because of all the trouble it took to get Zack to notice him in “All You Can Eat.” After seeing Zack’s attraction to another guy and seeing that attention reciprocated, it speaks more about Casey’s character in letting Zack be happy – even if that is with another guy. 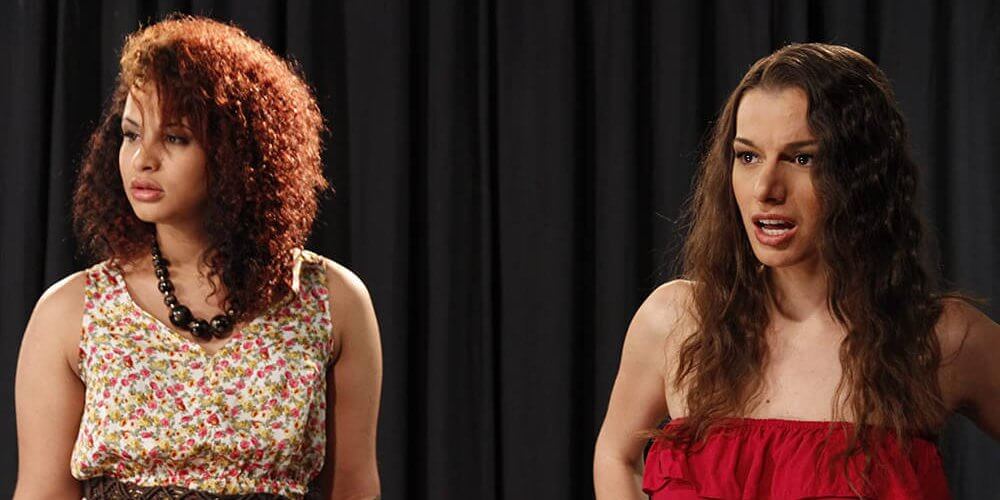 It’s hard to break down why I thoroughly enjoy this addition to the “Eating Out” oeuvre; there are simply too many reasons! I’ll touch base on a few of them. The obvious reason is the theatre angle and setting this entry at a drama camp. It’s a change from the college student/campus setup from other films, plus I have a fondness for theatre! I equally love the inclusion of series regulars: Tiffany, Aunt Helen, and even Mr Thompson because it helps tie all of the films together. And while I discussed it above under the Not-So-Good section, I really do enjoy Casey’s design to break things off with Zack. And I’ll freely admit that in “Eating Out: Drama Camp” we not only have more than one frontal nudity shot, but there are some very tittilating sex scenes that are shot quite tastefully.

Production-wise, “Eating Out: Drama Camp” is excellent. Q. Allan Brocka & Phillip J. Bartell are still behind the script, which continues to provide a great balance between comedy and heartfelt moments. One of my favourite moments is when Casey discusses with Penny about why he has to break up with Zack. It’s a heartfelt moment that’s equally a nice contrast to their usual crazy comedic antics. Additionally, the camera work and lighting are on par with the last entry. Brocka has returned to the director’s chair, and doing a much better job than in “Eating Out”, while Bartell also continues his job as film editor. Everything that finally came together in “All You Can Eat” is repeated in this entry.

But my favourite part of “Drama Camp” is Lilly. Not only is her character a trans woman, but the actress who portrays her, Harmony Santana, is a talented trans actress. And she’s rather sassy and dominant! While Jason is clearly attracted to Lilly but equally conflicted, Lilly knows who she is and who she wants – and is not afraid to be blunt. During a heart to heart with Casey, she admits that it’s odd for guys to just like her; how most either want the fetish of a trans woman or really want’s to be with a guy. But the best part is that the writers don’t have to explain who she is. When Genevieve calls Lilly “a man in a dress”, not only does Jason step in but Lilly puts her in her place – and then snaps at Jason because she doesn’t need a man to protect her. 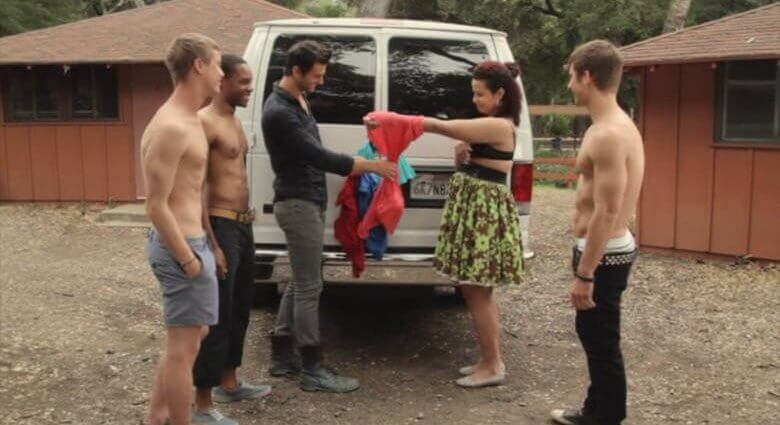 “Eating Out: Drama Camp” is another hysterical romp, this time set at a drama camp with Shakespeare, a ban on any sex, a relationship in trouble, and a guy pretending to be straight – what more could you ask for! This is definitely my favourite film in the entire saga, so check it out today!

Like the rest of the “Eating Out” films, there is no doubt that it’s a queer film. But “Eating Out: Drama Camp” has a new key relevance: we have a trans woman as part of the core ensemble. Even better, the actress portraying her is a trans woman herself – a great representation for the community. But the rest of the film is just as queer – and I’m not talking about the nudity and gay sex scenes!

Is your favorite queer film missing from my reviews? Let me know and I'll add it to my short list!
Suggest a Film

Were the World Mine

Eating Out: The Open Weekend 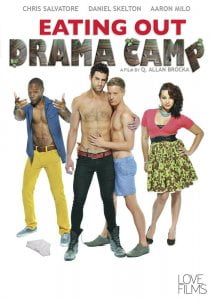 Do Not Sell My Personal Information

Unsubscribe at any time

Don’t see a review for your favorite queer film or short? Then let me know and I can try to review it sooner!