An overweight party planner meets the love of his life but is comically challenged by his own insecurity in the image conscious Los Angeles.

NOTE: This review for “Big Gay Love” was written for and published on my former Blogger.com site, using my old rating scale. I have kept this review as originally published, with a few minor tweaks.

Based off the brief synopsis for “Big Gay Love”, I was hoping for a light romantic comedy: “An overweight party planner meets the love of his life but is comically challenged by his own insecurity in the image conscious Los Angeles.” That was not at all what I got when I started to watch this film – to the point that I began writing this post while still watching the movie! There are so many things wrong with this film that I’m surprised it has a 5.1/10.0 rating on IMDB. Personally, I’d give it a 1.0/10

For one, the main actor Jonathan Lisecki is what I would consider an average build which fits the proposed storyline in comparison to the conceited party gay boys who live in L.A. – but for those of us who live in the rest of America, his build is quite common. Many consider the “dad-bod” the current desire for both men and women. Yes, medically he would be classified as overweight, but to base an entire comedy around his large size and subsequent issues in finding love ends up making a mockery of those who do not have the stereotypical gay body. Yet, in contrast to his film lover Andy, played by Nicholas Brendon, they are very similar in size. This issue alone takes much of the reported “comedy” away from “Big Gay Love”.

Second, the script is horribly written. About 98% of what Bob (Lisecki) says in “Big Gay Love” is negative, with multiple outbursts of overreacting (and overacting). Bob does not accept himself for who he is and thus, is unable to accept that anyone else might actually love him. Which is why Bob uses horrible half-hearted pickup lines that don’t work, and further the concept that gay society is shallow and vain towards guys who are heavier. Later on, Bob automatically jumps to the conclusion that Andy, the guy he decides to open his heart to, is instead sleeping with a thin, quite sexy closeted Tag (Jesse James Rice). [spoiler: they did not sleep together but – plot twist – Tag ends up seducing Bob, then turns it around against Bob to actual split Andy and Bob apart!] Or towards the end of the movie, when Bob tells a truly overweight Brian (who I actually would have rather seen as the star based on the premise) that he knows exactly what Brian wants – which is then slapped back in Bob’s face.

To be fair, “Big Gay Love” does have some sweet romantic moments such as when Andy and Bob finally sleep together. Here, we see Bob baring himself in front of Andy, ever self-conscious as he takes off his shirt and saying “If you’d even still want me after seeing all of my flaws.” Andy reminds Bob of what he told him moments before, “I don’t want you to be anyone else but yourself around me, and hopefully I can do the same.” Or, going back to Brian who while gushing like a giddy fan girl as Andy signs his book, admits that he was having his own self issues about being overweight to the point of wanting to ends his lift – until he discovered Andy’s book, which turned his life around. Simply and truthfully, Andy tells Brian him that if he ever needs to talk, to call him. Being overweight and not accepted in the gay community is a true epidemic, unfortunately with sad results. This moment had a spark of hope which stood out like a beacon amid the rest of the negativity in the film. (That is, until Bob opens his mouth after wards and ruins the moment.)

In short, “Big Gay Love” is one you might watch once and never need to see again – if you’re able to stomach the negativity from Bob and actually get halfway in when the storyline improves. 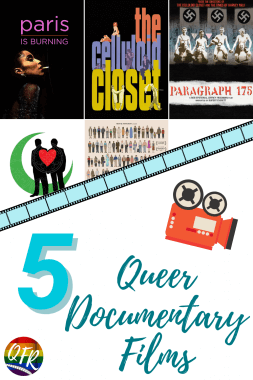